The major use of IR spectroscopy is in determining the structures of organic compounds.

In an IR spectrometer IR radiation in the range 400-4000 cm-1 is passed through a sample. The printout of the spectrum then shows which frequencies (wavenumbers) are absorbed.

IR spectra are always looked at with the baseline (representing 100% transmittance, i.e. zero absorbance) at the top. The troughs (usually called “bands”) thus represent wavenumbers at which radiation is absorbed. 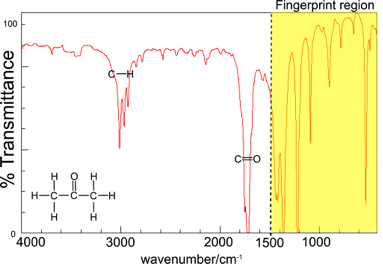 The infra red spectrum can be used to determine the bonds present in a molecule.

Thus, in the region above 1500 cm-1 in the IR spectrum of propanone there are two bands corresponding to the C-H stretch and the C=O stretch.

We are usually interested in identifying the bonds/functional groups in an organic molecule. To a good approximation the various bonds in a molecule can be considered to vibrate independently of each other. The wavenumbers at which some bonds vibrate are shown in Table A.2. 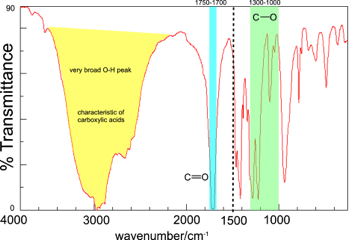 In order to identify the bonds present in the molecule we first of all look at the region above 1500 cm-1.

This contains a C-O bond and therefore we should now look in the fingerprint region to confirm the presence of an absorption in the region 1000-1300 cm-1, which is, indeed, the case. If there were no band in this region we would have to review our hypothesis that the molecule is a carboxylic acid. 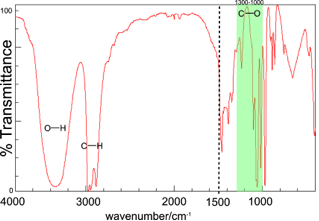 The IR spectrum of propan-1-ol is shown above:

Sorry, the comment form is closed at this time.